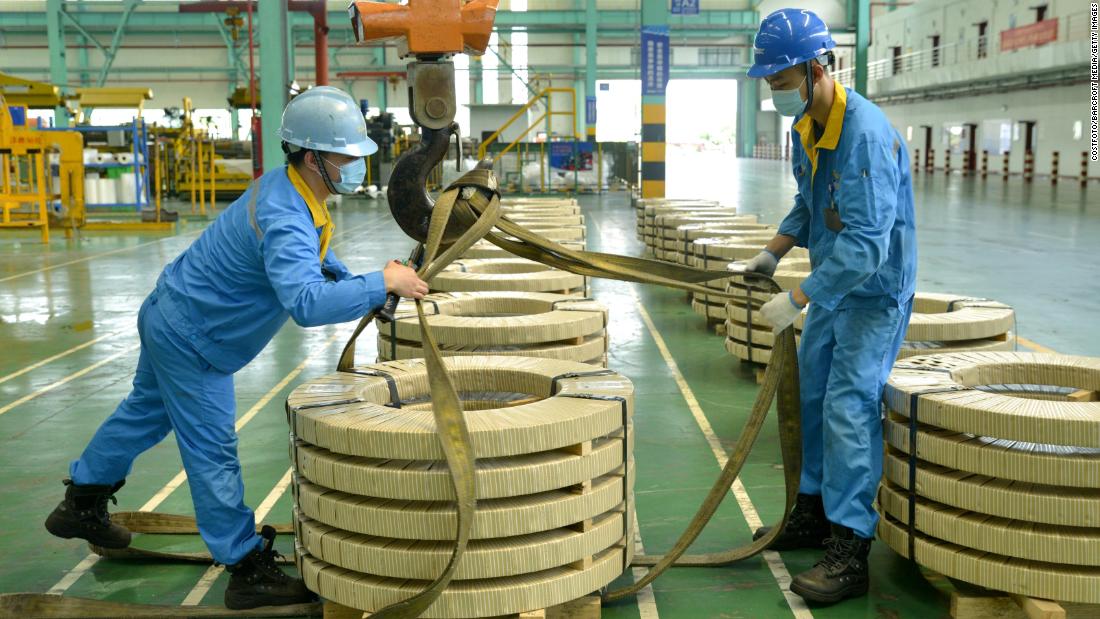 While the numbers of cases remain small by comparison with recent surges in infections in the United States and Europe, China has aggressively revived its “zero-Covid” strategy.

It has isolated some cities, closed down entertainment venues, canceled flights and rolled out mass testing as it tries to contain the spread — measures not seen at this scale since the beginning of the pandemic last year. Some trade at a major container port near Shanghai was even suspended this week after a worker tested positive for the virus.

Those drastic moves have already prompted some economists to slash their growth projections for the world’s second largest economy.

Goldman Sachs analysts forecast China’s GDP to grow by just 2.3% in the third quarter from the previous quarter — dramatically lower than the 5.8% increase they originally expected.

“With the virus spreading to many of China’s provinces and local governments reacting swiftly to control the spread of the highly contagious Delta variant, we have begun to see softening in national aggregate data,” the analysts said in a research report earlier this week, adding that they expect services like travel, catering and entertainment to be affected.

Still, despite the anticipated slump in the third quarter, the Goldman analysts still expect the recovery largely to remain intact this year. For all of 2021, they expect China’s economy to grow 8.3%, slightly lower than a previous estimate of 8.6%.

Other economists, though, have also warned of a hit to growth.

China has implemented “strict individual mobility restrictions” to better enforce its “zero tolerance” policy, analysts at JP Morgan wrote in a research note earlier this week. They forecast economic growth to halve to 2% in the current quarter, compared with a previous estimate of 4.3%. They also cut their 2021 GDP growth forecast to 8.9% from 9.1%.

“We expect the situation can be brought under control in the next several weeks, but the epidemic control procedure will dent consumption and services tentatively,” they added.

Beijing is expected on Monday to release more information about the economic recovery — including consumption, industrial production and investment — which should offer more clues about China’s economic recovery.

Those figures aren’t likely to be comprehensive, since they only cover July data and will omit whatever impact the virus has had through the first couple of weeks of August.

But there are other recent signs that the resurgence of the virus, along with the measures China is taking to contain it, could cause disruption.

On Wednesday, authorities shut down Meishan terminal in Ningbo-Zhoushan port — the world’s third largest container port — after a dock worker tested positive for Covid, according to the local government. The port handles goods that would fill around 78,000 20-foot containers every day. The Meishan terminal accounts for around a fifth of the port’s volume.
The problems there echo a lockdown that Chinese authorities imposed in May on Yantian, a critical port in southern China that can handle 36,000 20-foot containers every day. Even after that port reopened in June, it operated below capacity for a while, creating a shipping backlog that will take weeks to clear.

“This was one of the immediate risks that we’d seen emerging in China as the pandemic situation has deteriorated,” said Nick Marro, lead analyst for global trade at the Economist Intelligence Unit, in a research note on Thursday.

“The global trade and logistics environment is already in a pretty fragile state, particularly given all of the challenges we’ve seen over the spring and early summer,” he added. “Interruptions to trade not only pose problems for shipping and consumers, but also manufacturers who rely on critical imported components.”

The country is also battling with surging inflation and growing debt risks.

The producer price index — which measures the cost of goods sold to businesses — increased 9% in July from a year earlier, matching the highest level in nearly 13 years seen in May. High producer inflation is troubling news for China’s businesses and the country’s economic recovery. It means that the rising costs of raw materials are now more aggressively cutting into company profits, and could force them to control costs by slowing down production or even shedding workers.
Debt risks are another concern. China’s corporate bond defaults climbed to 62.59 billion yuan ($9.7 billion) in the first half of the 2021, the highest level for the same period on record, according to Fitch Ratings.
A sweeping regulatory crackdown on private businesses that Beijing wants to keep in check has also upset investors and shaken market confidence.

Those recent regulatory measures on sectors ranging from tech and finance to education have wiped out more than $1 trillion in market value from some of China’s most valuable companies, according to Goldman Sachs.

And analysts at JP Morgan said the clampdown, particularly in tech and education, “will not only lead to disruption in tutoring business, but also lead to rising unemployment and drag on the recovery in income growth.” They added that the country’s ban on for-profit tutoring alone could affect millions of jobs.

Data showed that China’s borrowing drastically slowed last month, indicating that businesses and individuals may be reluctant to invest or spend, which could lead to reduced employment, less consumption, and slower growth.

Chinese banks only extended 1.08 trillion yuan ($167 billion) in new yuan loans last month, down nearly 50% from June, according to data released by the People’s Bank of China last Wednesday.

A broader measure for financing, including loans offered by nonbank institutions, totaled 1.06 trillion yuan ($164 billion) in July, also down sharply from 3.67 trillion yuan in June.

The slowdown likely reflected “weak credit demand amid tightened regulations” on property, consumer credit and the ability of local governments to borrow, according to Goldman Sachs analysts.