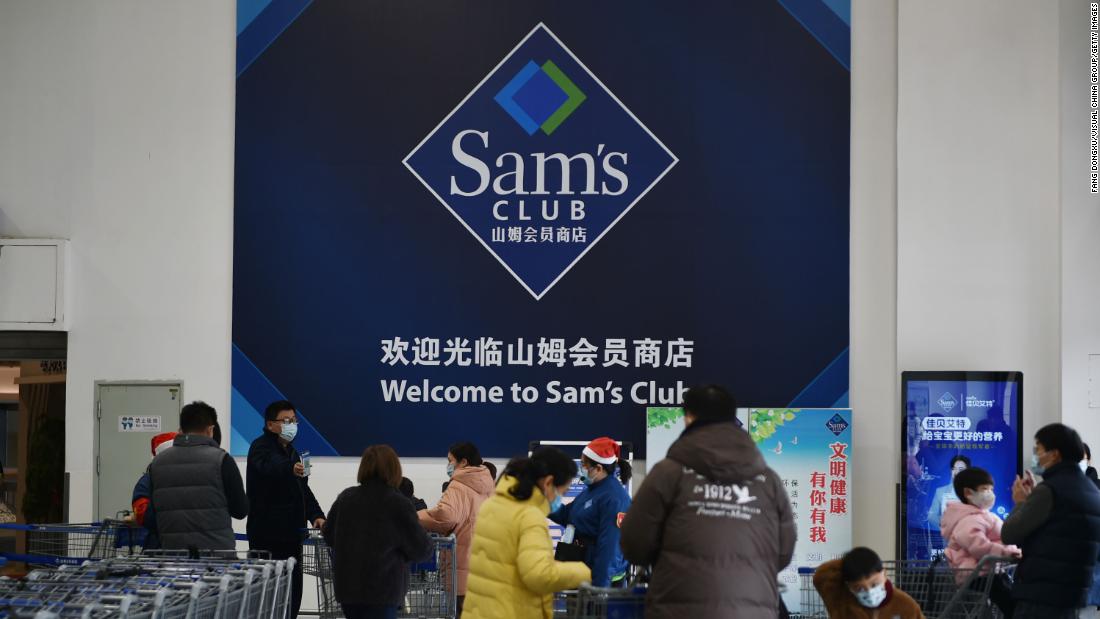 The firestorm began late last month when people on Chinese social media began accusing Sam’s Club, the warehouse retailer owned by Walmart, of removing all Xinjiang-sourced products from its app in the country.

“Pulling all products from a region without a good reason hides a hidden agenda,” the ruling Communist Party’s Central Commission for Discipline Inspection (CCDI) said in a statement, adding that Sam’s Club would “get a taste of its own medicine.”

There’s still a lot that’s unclear about the allegations against Walmart and Sam’s Club in China. When asked by CNN Business on Monday about the dispute, Walmart (WMT) declined to comment.

The controversy started late last month when some Chinese users posted on social media that they couldn’t find Xinjiang-sourced products on the Sam’s Club app.

This was around the same time that US President Joe Biden signed into law new rules that effectively ban imports of products made in Xinjiang over longstanding concerns about alleged forced labor.
“I can’t find any of Xinjiang’s food products that I used to buy on Sam’s Club, including their famous red dates, raisins and apples,” one user posted December 22 in a snack discussion group on Douban.com, a Chinese movie reviewing and social networking site. “At the same time last year, these products were everywhere. But now I can’t find even one. It’s hard to believe they are not doing this on purpose.”

The user’s comments were echoed by many others who mentioned similar experiences. Discussion quickly spread to other social media platforms, including Weibo and social e-commerce platform Xiaohongshu.

As those claims were blowing up online, Guancha.cn, a nationalistic Chinese news site, cited customer service representatives from Sam’s Club as saying that products sourced from Xinjiang were “sold out.”

Reached by phone this week, a Sam’s Club customer service representative told CNN Business that Xinjiang-sourced products were unavailable “mainly because of the storage situation.”

“At present, stores will also provide some similar goods for customers to choose,” the representative said. The company did not give any more details.

Chinese authorities have expressed skepticism about those reasons. In Friday’s statement, the CCDI accused Sam’s Club of trying to “muddle through” the controversy using ambiguity.

“Anyone with any knowledge of chain inventory management will realize that pulling all Xinjiang products off the shelves because of ‘inventory’ is a self-deceiving excuse,” the agency said. “To maintain the regular operation of Sam’s Club, how could it happen that all products from Xinjiang were out of stock?”

The agency added that Walmart “must show sufficient sincerity” if it wants to gain a “firm foothold” in China. The country is one of Walmart’s largest international markets.

Not the only brand

Walmart is not the only Western brand that has been ensnared over a dispute about human rights in Xinjiang, where up to 2 million Uyghurs and other Muslim minorities are believed to have been placed in detention centers across the region, according to the US State Department.

China has repeatedly and forcefully denied abusing the Uyghur people or using them to perform forced labor, instead saying that Uyghurs are being taken to re-education camps in order to prevent religious extremism and terrorism.

China has also criticized Western companies that are cutting ties with Xinjiang, after facing pressure from governments or investors at home to do so.

Last month, Intel (INTC) apologized in China following a backlash over a directive to suppliers not to source products or labor from the Xinjiang region.
And last March, H&M, Nike (NKE), Adidas (ADDDF) and other Western retailers were threatened with a boycott because of the stand they had taken against the alleged use of forced labor to produce cotton in Xinjiang. H&M was even dropped by major Chinese e-commerce stores. In July, the European fashion retailer reported a more than 20% fall in China sales following the boycott.
Still other firms have continued to do business in the region. Tesla, for example, just opened a new showroom in Xinjiang’s capital city of Urumqi.