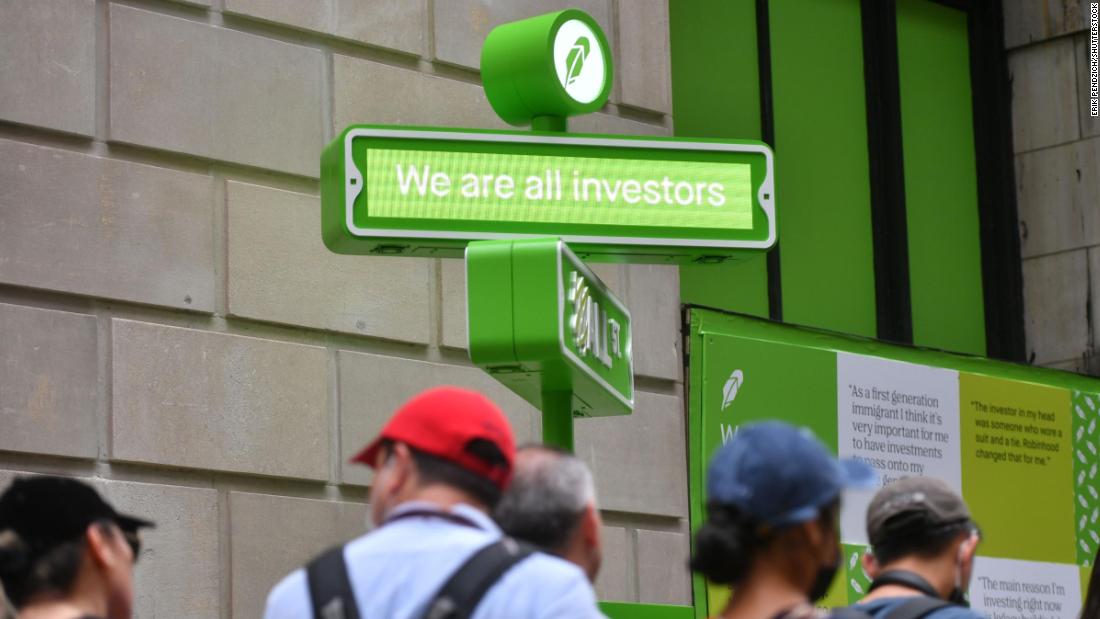 It’s way too soon to make that call. But notably, shares of Robinhood debuted at $38 — the same price as Facebook (FB) in its May 2012 IPO. Today Facebook is trading at nearly $361.

Robinhood has certainly had a rollercoaster ride so far: The stock tumbled 8% on its first day and fell as low as $33.25 the second day. But it’s since roared back up to more than 40% above the IPO price and is now trading around $54, even briefly hitting a high of $85 last week.

“The platform that powered the meme stock movement has itself become a meme stock — sometimes to Robinood’s benefit and sometimes to its detriment,” said Jonathan Anastas, chairman of Alpha Esports Tech, a mobile gaming firm.

So much for the Reddit army of “apes” bringing Robinhood to its knees? Perhaps. The company has been credited with — and also criticized for — helping turn investing into something like a game. But Anastas argues Robinhood is simply following the money.

“They appeal to a trader demographic that is focused more on emotion and momentum,” Anastas said. “Robinhood is not valued on fundamentals.”

Already on the hunt for acquisitions

Still, Robinhood is now a publicly traded company with a market valuation north of $45 billion and it’s looking to grow its business quickly — just like Facebook did before it.

The platform announced Tuesday that it is buying Say Technologies, an online shareholder communications platform geared towards individual investors, for $140 million in cash.
“Like Robinhood, Say was built on the belief that everyone should have the same access to the financial markets as Wall Street insiders,” Aparna Chennapragrada, Robinhood’s chief product officer, wrote in a blog post.

“We share a common goal of eliminating the barriers that keep people from participating in our financial system,” she added.

The fact that Robinhood is looking to make an acquisition so soon after its IPO is also similar to a big deal Facebook pulled off back in 2012, just before it went public: Facebook bought Instagram for $1 billion, a deal that some felt was too pricey at the time.

Facebook, like Robinhood, also struggled out of the gate. In fact, it was an even bigger IPO flop as shares plunged about 50% below their IPO price in the first few months of trading before bottoming out.

But CEO Mark Zuckerberg wound up having the last laugh. The Instagram acquisition helped Facebook become a bigger player in mobile and allowed it to attract even more of the young users advertisers covet. Nine years after its “failed” IPO, Facebook is now worth more than $1 trillion.

Plenty of competition in fintech and from Wall Street

It’s hardly a given, however, that Robinhood is on track for a similar surge by 2030. Robinhood CEO Vlad Tenev, like Zuckerberg, will need to stay on top of market trends to get even bigger.

“Robinhood has had a lot of naysayers but they’ve amassed millions of account holders and the marching orders are clear,” said Michael Kamerman, CEO of Skilling, an online brokerage firm. “I think Vlad wants to attract even higher net worth clients.”

Robinhood will also need to fend off a large swath of competition over the next decade.

Rival online trading firms ae gunning for Robinhood, including Webull and eToro, which is in the process of merging with a special purpose acquisition company (SPAC) so it too can go public.
Meanwhile financial giants Charles Schwab (SCHW) and Morgan Stanley (MS) are courting retail traders more aggressively too, thanks to their respective acquisitions of online brokers TD Ameritrade and E-Trade.

With that in mind, Robinhood could also one day wind up as a juicy takeover target for a larger financial firm that would probably love to get access to Robinhood’s younger customer base.

“Wealth has moved from boomers and Gen X to millennials and Gen Z,” Anasta said. “Younger investors have different preferences.”