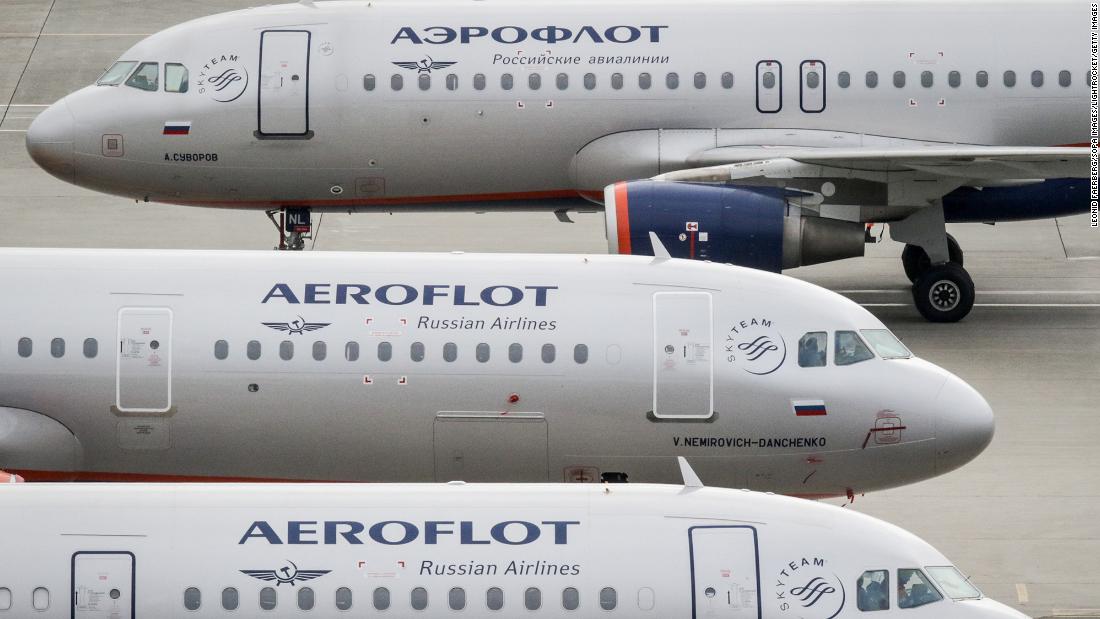 President Vladimir Putin signed a law Monday as part of the government’s anti-sanction measures that will allow Russian airlines to register planes leased from foreign companies in Russia, where they will be issued local certificates of airworthiness, according to a statement from the Kremlin.

The bill will make it possible for Russian airlines to keep their foreign leased aircraft and operate the planes on domestic routes, while making it harder for foreign companies to reclaim their jets without Russian government approval.

US and European sanctions imposed on Russia require leasing companies to repossess all planes they leased to Russian airlines by the end of the month.
Western aircraft makers such as Airbus (EADSF) and Boeing (BA) have already cut off Russian airlines’ access to the spare parts they need to maintain and safely fly their jets. Russian airlines operate 305 Airbus jets and 332 Boeing jets, according to data provided by aviation analytics firm Cirium.

Russia also has 83 regional jets made by Western manufacturers such as Bombardier, Embraer and ATR. Only 144 planes in the active fleets of Russian airlines were built in Russia.

Cirium data shows that 85% of those foreign-made planes are owned by leasing companies, and puts their combined value at $12.4 billion.

It was unclear how the leasing companies could have taken possession of these planes while they remain on Russian soil. Additional sanctions prohibiting Russian aircraft from flying to most other countries has restricted its airline industry essentially to domestic flights.

Leasing companies have not responded to a request for comment on Russia’s actions, and it is unclear if they’ll even want those planes back. The planes will not have access to replacement parts and won’t have valid airworthiness certificates that would be accepted by western airlines.

“These jets won’t be supported with parts and maintenance any longer,” said Richard Aboulafia, managing director of AeroDynamic Advisory. “It’s a real issue if they lose their certificates of airworthiness, which can happen if proper records aren’t kept, or especially if they’re cannibalized for parts.”

Losing access to 85% of its foreign-built planes would be a crippling blow to the country’s economy.

Russia is the world’s largest nation by landmass, more than twice the size of the continental United States. It needs a viable airline industry to keep its economy working, said Charles Lichfield, the deputy director of the GeoEconomics Center at the Atlantic Council, an international think tank.

“It is an important part of Russia’s economy,” he said. “They want some basic domestic industry to remain in place. Russians don’t fly as much as Americans do. They don’t fly to Siberia for vacation.”

Its airline industry is a crucial link for businesses, not only for international flights but also for domestic service for its energy sector, due to the need to transport engineers, other workers and equipment to and from its far flung oil fields.

“Aviation is an incredible enabler of economic growth, both domestically and internationally,” said Robert Mann, an airline consultant and analyst. “Without it, you take it back to an almost agrarian economy, trying to operate with a railroad network.”

Russia doesn’t need all the planes it is seizing, as the blow to its economy from the sanctions will greatly reduce the need for air travel, said Betsy Snyder, credit analyst covering aircraft leasing companies at Standard & Poor’s.

“The Russian economy is tanking,” she said. “No one will be going in and out of Russia, the Russian citizens are losing their money so they don’t have the money to travel going forward. It could be that [airlines] will be a much smaller business.”

That raises the possibility that many of the planes being seized would be cannibalized for parts.

“If you don’t have parts manufacturing authority, then you shouldn’t be making it yourself,” Mann said. “You don’t know what standards were used. Have you gotten the internal characteristic right? When you put it into a turbine section of an engine, will it perform like it was designed?”

Mann said that when a part reaches the end of its designed usefulness, known as “green time,” an airline must choose between flying with parts that should have been replaced for safety reasons or robbing parts from other planes.

“You can go through that process as long as you have planes that have green time,” he said. ” As you run out of airplanes, your network gets smaller and you can fly fewer hours every day, until you don’t have an airline.”

So even keeping the planes won’t necessarily keep the Russian airline industry operating.”Within a year Russia will cease to have any kind of viable airline industry,” Aboulafia said, adding that the its airline industry could soon find itself somewhere between the heavily sanctioned industries in Iran and North Korea.

Can a country as large as Russia live without a modern, viable airline industry? “That’s a thesis that has never been put to the test,” Aboulafia said. “But it’s about to be.” 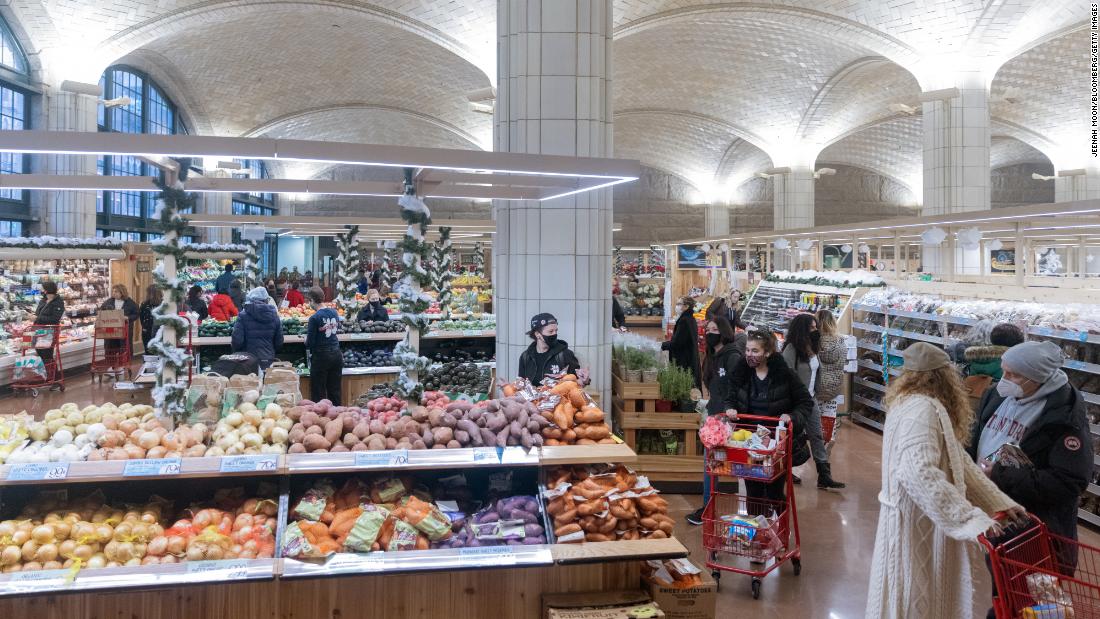 The US consumer price inflation index rose 7% over the past year before seasonal adjustments, the steepest climb in prices since June 1982, the Bureau of Labor Statistics reported Wednesday.
It was also a faster rate of increase than November’s 6.8%, and higher than economists had predicted.

Stripping out food and energy costs, which tend to be more volatile even in non-pandemic times, inflation rose to 5.5% between December 2020 and December 2021 — the biggest annual jump since February 1991. That was a much faster pace than in November, when core inflation stood at 4.9%.

Separately, the food price index climbed 6.3%, while grocery prices rose even more: 6.5% last year. The energy cost index rose 29.3% over the past year.

But even though prices went through the roof last year, they are still nowhere near the historic highs from the 1980s. Inflation peaked in the spring of 1980 at 14.8% without seasonal adjustments, 14.6% with adjustments.

For the month of December alone, prices rose 0.5%, adjusted for seasonal swings. It was slightly more than economists had forecast but a decrease from the 0.8% monthly increase in November.

What got more expensive?

Price trackers for housing as well as used cars and trucks were the biggest contributors to the December price hikes.

Food costs also went up — rising 0.5% — but at a slightly slower pace than in recent months. Prices rose in nearly all major grocery categories, with fruit and vegetable prices rising the most.

Energy costs declined by 0.4%, marking the first monthly decline since April 2021. But the decrease is unlikely to last into 2022.

“Unfortunately, energy prices have rebounded into January after a temporary Omicron-hit in December,” said Action Economics chief economist Mike Englund. He also expects that 12-month inflation data will continue to trend higher until at least February, data for which will be released in March.

This is a developing story. It will be updated