Fox News has canceled Lou Dobbs’ Fox Business show, Lou Dobbs Tonight, and will replace him with a rotating group of hosts.

Dobbs, one of Donald Trump’s steadfast defenders, was among the defendants named in election systems company Smartmatic’s $2.7 billion defamation lawsuit filed on Thursday against Fox Corp. The lawsuit claims that Dobbs, Maria Bartiromo and Judge Jeanine Pirro, along with guests Sidney Powell and Rudy Giuliani, spread falsehoods that the company rigged the results of the 2020 presidential election.

A Fox News spokesperson said of Dobbs’ cancellation, “As we said in October, Fox News Media regularly considers programming changes and plans have been in place to launch new formats as appropriate post-election, including on Fox Business – this is part of those planned changes. A new 5 PM program will be announced in the near future.”

Dobbs’ will be replaced by a show called Fox Business Tonight, with Jackie DeAngelis hosting on Monday and Tuesday and David Asman hosting on Wednesday, Thursday and Friday. It will then repeat at 7 PM ET.

Dobbs has been a signature figure at the business network, drawing its highest ratings. The channel touted the fact that his 5 PM ET show outpaced its CNBC competition last year, drawing an average of 305,000 total viewers, and that even a rebroadcast at 7 PM ET beat Shepard Smith’s recently launched newscast on the NBCUniversal network.

On Twitter, Dobbs retweeted reactions to Fox News’ move, including a statement from Trump, “Lou Dobbs is and was great. Nobody loves America more than Lou. He had a large and loyal following that will be watching closely for his next move, and that following includes me.” Dobbs also retweeted some swipes at Fox News, including a comment from Sebastian Gorka with the hashtag, “FoxIsFinished.”

In December, after Smartmatic fired off a legal threat, Dobbs ran a segment that was a fact-check of claims that had made on his show. The segment featured Eddie Perez, a voting technology expert, who debunked many of the claims. The same segment ran on Pirro’s show and Bartiromo’s program.

In a statement on Thursday in response to the Smartmatic lawsuit, Fox News Media said it “is committed to providing the full context of every story with in-depth reporting and clear opinion. We are proud of our 2020 election coverage and will vigorously defend this meritless lawsuit in court.”

According to the Times, Dobbs is still under contract but was unlikely to appear on the Fox News Media networks again.

Dobbs, 75, hosted Lou Dobbs Tonight for Fox Business since 2011, having joined the network after a long tenure at CNN. He was at CNN from its start in 1980, specializing in business reporting, but drew much greater attention as he began adding commentary to his telecasts, particularly about illegal immigration. That reportedly led to clashes with network executives. At Fox News, he also gave a platform and advanced conspiracy theories, including that Barack Obama was not born in the United States and those about Soros.

In the aftermath of the election, Dobbs gave a platform to unfounded claims of election fraud, as Trump’s campaign racked up losses in court as they challenged the results. On his Nov. 30 show, Dobbs spoke directly to the then president, and said, “The irregularities in this year’s election are not just fraud, electoral or voter, they are another attempt to overthrow the president of the United States.” 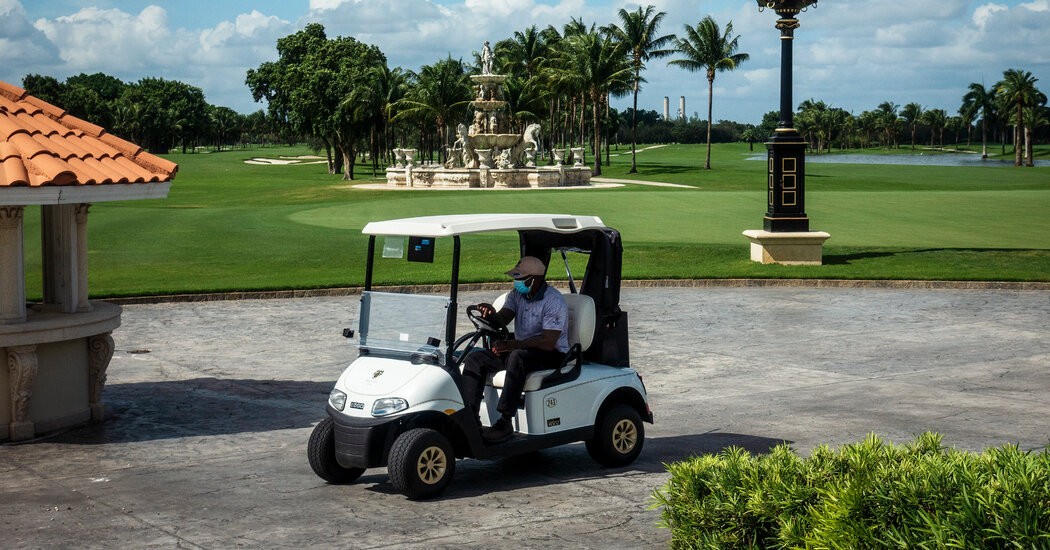 Even before the pandemic and the riot, the Trump presidency had complicated business for the Trump brand.

For much of his term, the company was stuck in neutral as the family name was removed from several properties and potential new deals never emerged. Mr. Trump’s polarizing politics also appeared to create a red-blue divide, leaving his hotels in Democratic bastions like New York and Chicago struggling, while his golf club in North Carolina boomed.

One bright spot in 2020 was Mar-a-Lago, Mr. Trump’s private club in Florida and his intended new residence. Revenues at Mar-a-Lago rose from $21.4 million to $24.2 million, an increase of 13 percent. The company’s retail business also grew, more than doubling its revenues to nearly $2 million.

The Trump golf business saw mixed results. While many of the courses had losses of 10 percent or more, revenues rose at clubs in West Palm Beach, Fla., and another near Charlotte, N.C., as golf became a popular outdoor escape from the dangers of Covid-19.

Trump Turnberry, a golf club in Scotland, had a significant downturn last year. Revenue fell from $25.7 million to $9.8 million, about 62 percent, as Scottish authorities closed it because of the virus.

Some of the Trump Organization’s biggest declines came in its hotel business, as the virus halted travel and the company cut back on staff to stem its losses. The hotel in Washington, which the Trumps had considered selling before the pandemic, was particularly hard hit. The restaurant and the famed hotel lobby — long a gathering place for lobbyists, White House aides and other Trump supporters — have been closed for extended periods over the past year, and hotel occupancy is down significantly.

Mr. Trump reported assets worth at least $1.3 billion, down slightly from 2019.

He also reported receiving 10 gifts, including an Ultimate Fighting Championship belt, golf gear, a leather bomber jacket and a computer from Tim Cook, the chief executive of Apple, worth $5,999.